NAIROBI, Kenya- The third edition of the SportPesa Cup that ended last Sunday in Dar-es-Saalam, Tanzania crowned a new champion since its inception in 2017 when Kenya's Kariobangi Sharks FC succeeded compatriots and two-time winners Gor Mahia FC as titleholders.

The East African spectacle was filled with goals, drama, upsets and surprises- crowned by the stunning success of the SportPesa Premier League (SPL) side who edged domestic rivals Bandari FC 1-0 in an enthralling final.

Sharks were making their second appearance in the competition after failing to make it past the quarterfinal stage in last year's edition held at the Afraha Stadium in Nakuru.

Aside from the winners prize of USD 30,000 (just over KSh3m), the high-flying Sharks side will host English Premier League’s Everton FC later in the year as the biggest prize that comes with lifting the trophy.

For the runners-up, it was their maiden appearance alongside little-known Mbao FC of Tanzania, who stunned the region by making it into the semis after knocking out Gor 4-3 on post-match penalties after rallying from going a goal down to force a 1-1 draw in regulation.

In the wake of a highly competitive tournament, SportPesaNews has a look at the five top players from the week-long tournament.

The pint-sized Ugandan forward had an outstanding tournament and his prowess saw him recognised as the Most Valuable Player after Sunday’s final.

Wadri was also the joint-top scorer after three games, scoring the only goal from the spot in the quarterfinal victory over Singida United FC.

Spot-on Wadri was on hand to score again in a 2-1 comeback victory over Tanzanian powerhouse Simba SC in the semi-finals. His electrifying pace and ability to take on defenders was key to Bandari’s road to the final.

The unknown goalkeeper’s status before the tournament will never be the same after his magnificent and consistent performances wrote his name in the SportPesa Cup history books.

Mnata proved to be a hard nut to crack from the onset as he had a superb second half display in the opening match against the champions Gor, only conceding from Dennis Oliech’s penalty.

Mnata pulled off two fantastic saves from Oliech and Ugandan striker Erisa Ssekisambu to frustrate Hassan Oktay’s men to settle for a penalty shootout before the plucky side from Mwanza completed the biggest upset in competition history by sending the two-time champions packing.

In the semis, Mnata was in top form as he did extremely well to keep out the relentless Sharks attack and his safe hands proved their worth as he saved captain Patillah Omotto’s first spot kick in the shootout. The save was not enough as they lost 5-6 to be relegated to the third/fourth place play-offs.

Mnata continued to underline his presence in the Mbao team as he was named man of the match in the preview to the final before being gifted the Golden Glove Award.

Abuya began the tournament with a bang, putting on a commendable show in their spellbinding opening 3-2 victory over Tanzanian league leaders Yanga SC to book a place in the semis.

Abuya scored a brace to inspire William Muluya’s side to the all-important victory. The pacy forward proved to be a menace to the Yanga defence and his efforts were paid off by two well-taken goals that gifted him the man of the match honors.

Both his goals ensured he received the Golden Boot Award after the final match on Sunday, which despite him not getting his name on the scoresheet, his presence was key to Sharks victory.

Without any prior knowledge of Mwendwa, one look at him and one would completely dismiss the fact that he is one of the most promising wingers East African football has to offer. 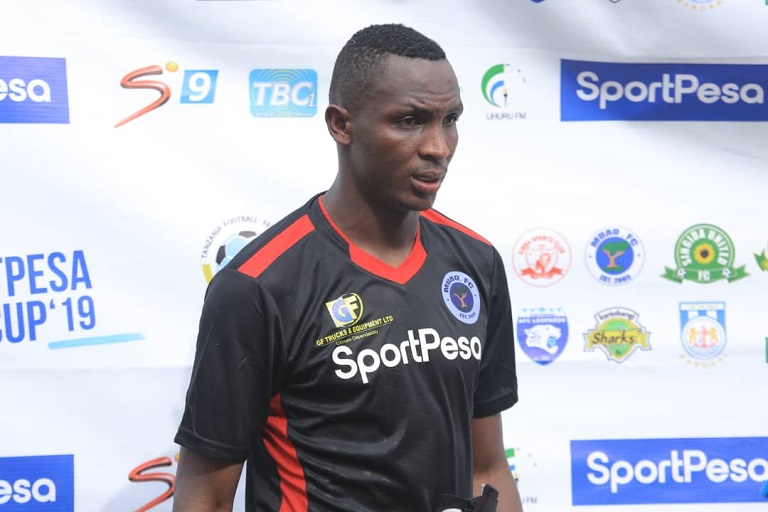 Mwendwa received two consecutive man of the match awards, which came with a USD 500 (KShs 50,000) winners cheque, for unmatched performances in the semi-final victory over Mbao FC and the highly-contested Bandari final.

His pace, agility, creativity and ability to pick out a pass were Sharks greatest threat moving forward throughout the tournament.

Three yellow cards came from challenges on Mwendwa due to the fact that he left defenders in his wake, prompting them to make late tackles constantly bringing him down.

The icing on the cake was Mwendwa’s winning goal that gifted Sharks bragging rights and a maiden SportPesa Cup victory.

The veteran forwards electrifying pace and eye for goal proved to be too much for AFC Leopards SC who lost 2-1 to Simba in the quarters on the second day of the tournament at the National Main Stadium.

Okwi, captaining the Simba side on the day, gave his side a deserved lead and had two great chances to get on the scoresheet again but was unlucky, after Jairus Adira made two great saves to deny the Ugandan.

In the semis, Okwi started on the bench and came on in place of goalscorer Meddie Kagere in the second half. The forward then struck Farouk Shikhalo’s crossbar and registered four attempts on goal throughout the second stanza.

Defenders found it difficult to deal with his constant threat and he scored his final goal from the penalty spot in the shootout, beating Mbao to claim third place.